Characteristics of the Scottish Highlander

But only few people know that compared to other breeds, Highland cows come out on top in many more than just esthetic regards.

Highlands have a double coat of hair which consists of a long wavy oiled outer coat to shed rain and snow and a downy undercoat that keeps them warm. When exposed to hotter and dryer weather, Heilan Coos shed the heavy outer coat.  When fall comes, with colder and damper weather, they grow a new outer coat.

The coats come in a variety of colors and can be black, red, brindle (striped), yellow, white and silver colored.

Their forelocks and long lashes shield their eyes from flying insects. As a result, pinkeye and cancer eye are uncommon. 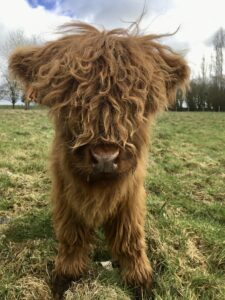 young Mungo with his curly fringe 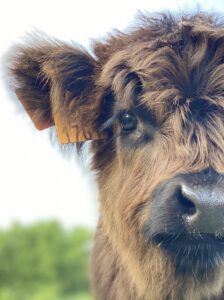 little Fie with her lashes for days

The horns of Highlanders are long and curved en tend to darken towards the tip. Cows have upward growing horns, while the bulls horns come level out of the head, slightly inclined forward and rising slightly toward the points. 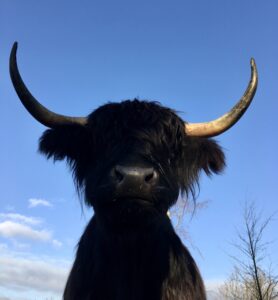 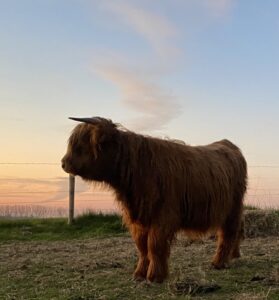 Highlands are remarkable for their longevity. They can age up to 20 years and many Highland cows continue to breed to the age of sixteen or even older. The Highland cows are exceptional mothers, with all cows in the fold taking care of all the calfs. Heilan Coos are a slow maturing breed. They are weaned at the age of 8 to 10 months and sexual maturity is reached at about eighteen months. The gestation period lasts approximately 38 weeks.

Highlands tend to be docile and calm and do not stress easily. However, the Highlander will strike with force and determination when there’s a calf in need or when it’s cornered and scared.

One of the natural enemies of Heilan Coos is the wolf. So taking your dog into nature reservations for a walk might not be a good idea and it’s an absolute no-no when he’s off leash. Chances the Highlander would attack are real. 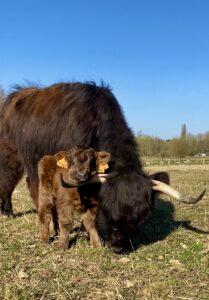 A fold has a clear hierarchy of dominance and structure, which reduces aggression. Social standing depends on age and sex, with older cattle being dominant to calves and younger ones, and males dominant to females. Young bulls will dominate adult cows when they reach the age of 2 years. Calves from the top ranking cow are given higher social status, despite minimal intervention from their mother.

Their milk is high in fat. But their meat is lower in cholesterol and fat than that of most other cattle breeds. On the other hand, it is higher in protein and iron then other beef. Yet, it is more tender and succulent than the meat of almost every other cattle breed. That is because Highlanders aren’t insulated warm in winter by subcutaneous fat, but by their thick shaggy double coat. So the meat is richer in flavor, marbled with fat and a flavor that hints at game meat.

Originally, small farmers kept Highlands as house cows to produce milk and for meat. Nowadays it’s mostly bred for the meat, although, because of their small size they’re unsuitable for agriculture for economic reasons.

For the most part they are used for grazing and for nature reserve management because they thrive on poor pasture, grass and woody plants that other cows wouldn’t eat.